It’s been a good year for Jami Lynn. With high honors in the Rocky Mountain Folks Festival’s Songwriting Showcase Finals, new album “Fall is a Good Time to Die” named to The Telegraph’s top country albums of 2015 (next to Willie Nelson, The Punch Brothers, and Dar Williams), and critics proclaiming her “5 out of 5 stars, essential listening” (Empty Bottles and Broken Souls), it’s been a good year. But this year is not only the culmination of hard work and good luck, but the fruition and maturing of two musical passions-of writing and performing.

Hailing from the Great Plains of eastern South Dakota, Jami began performing folk and bluegrass music at the age of thirteen. It took little coaxing from her grandfather to make the transition from the audience to the stage, where old-time country, polka, and regional folk music reigned supreme. At the age of sixteen, Jami began accompanying herself on guitar and writing her own music. After high school, Jami Lynn attended the University of South Dakota majoring in Vocal Performance. Though it was clear that opera was not in her cards, Jami stuck with music, spending a semester at Tennessee State University in Nashville to study Commercial Music and immerse herself in the singer/songwriter scene. While the experience honed her performance and songwriting skills, it also heightened Jami’s awareness of her deep connection to the landscape and culture of the Upper Midwest.

Upon returning to finish college in South Dakota, Jami Lynn began work on her senior thesis, “Early American Folk Music of the Upper Midwest.” What began as a typical slap-it-together-and-call-it -good thesis turned into an intensive year of research resulting in academic presentations in museums, libraries, and historical societies, and most importantly, the recording of Sodbusters, her first full length solo album. Inspired by stories of her ancestors trek from the East coast to the Dakota Territory, the title track of Sodbusters offers the perspective of Jami Lynn’s great-great grandmother, Lydia Huff. In addition to six original songs, the album features five folk songs from the South Dakota area. A lumbering ballad from the forests of Minnesota, a Norwegian lullaby, an Irish folk tune, and a cowboy ballad from the open range compliment her own artfully crafted folk songs. Sodbusters not only caught the attention of international critics in France and the Netherlands, but was included in the Smithsonian's Shared Harmonies Project.

"Fall Is A Good Time To Die" is the first album of Lynn's comprised entirely of original songs, self-produced alongside her band, Dalton Coffey (dobro, mandolin) and Andrew Reinartz (bass). Lynn’s voice is reminiscent of Anaïs Mitchell’s, with a darker, wilder quality all her own, as if she were born to project her voice across the plains. With the power and dynamic of My Brightest Diamond, Lynn’s voice is complimented by her deceptively creative melodies. When not performing for public audiences Lynn also brings folk music to elementary students and hospital systems through the South Dakota State Arts Council’s Artists in the Schools program and Touring Artists program. She's also shared the stage with legendary folk singer Spider John Koerner, Gillian Welch, The Wood Brothers, Jolie Holland, Mason Jennings, Trampled by Turtles, Charlie Parr, Chatham County Line, The Pines, Special Consensus, and claw-grass great Mark Johnson. Jami is currently based out of Spearfish, SD.

Q&A
J: What is the story behind your song "Wolf"?
J: My mother and I saw a wolf in Northeastern South Dakota in the middle of the day once. It was eerie, but so cool. We don't really have wolves around those parts any more. I wrote the song from the wolf's point of view to explain how it came to be there in the first place.
J: Why do you write music?
J: I think I write music to capture pieces of my surroundings. Most of what I write has a strong sense of place. I've made two albums now that have a strong connection to the upper Midwest or South Dakota, in particular.

J: What are your fondest musical memories?
J: My best memories in music all involve my first band, The Aquila Band. At 19, I was entirely new to playing with a band or recording. My band-mates on the other hand were seasoned musicians, and very talented. Everything was new and exciting, and the learning that occurred in those first years was incredible.

J: I totally relate to your experience of being surrounded by "seasoned musicians." I call them my "bread and butter." If you could open a set for anyone, who would it be?
J: Billie Holiday, hands down. Not only was she an incredible vocalist, but she was writing incredible songs when very few women were doing so.
J: Why is independent music important to you?
J: I think the shape of the music scene today can completely be attributed to the creativity and hard work of independent musicians. I can say with confidence that there is nothing holding and musician back from making a go of it but hard work and a bit of talent. In the past, there wasn't the case. Musicians had to depend on some bigger entity to make a living in music. Not so today! Go Indie! Go internet!

J: Know your strengths. Sure, I can download a free program and design my own posters (which I still do part of the time), but should I? Probably not. I can handle my own booking and book-keeping well, but I am not a graphic designer. Do what you do well, and delegate the rest.

J: I couldn't have said it better myself...so I won't. Are you planning to release any new music soon?

J: While I don't have another record release planned, I'm well into planning my next EP- a solid little jazz project. 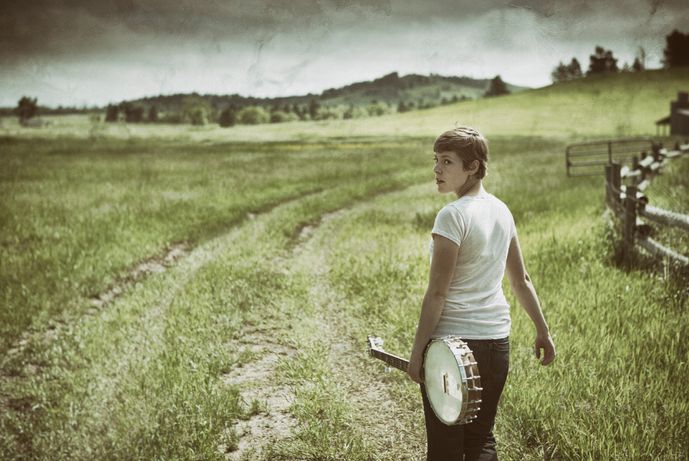